Trending
You are at:Home »Health »Depression during and after pregnancy
This blog has been viewed by: 162

Motherhood is one of the greatest gifts that a woman usually receives. However, this gift doesn’t come without its challenges. A common but not commonly discussed depression. One may assume that with such a positive feeling, why would one feel depressed. Legitimate question, however, while asking such a question, one usually overlooks the fact that the to be mother is a woman too.

She has emotions, she has expectations and pregnancy comes with its set of hormonal upheavals. In such a situation, psychological or mental pressure is an obvious occurrence. In this blog, we will discuss how pregnancy leads to depression.

What causes depression during and after pregnancy?

One might get depressed for a variety of reasons. During and after pregnancy, the body goes through a lot of hormonal changes as a woman. For example, the feminine hormones oestrogen and progesterone are produced at considerably higher levels in a pregnant woman’s body. However, within the first 24 hours following childbirth, these hormone levels rapidly return to pre-pregnancy levels.

In the same way, menstrual hormone fluctuations can cause comparable symptoms during and after the period; these hormone changes may cause depression. A decrease in thyroid hormones generated by the thyroid gland is another probable explanation of similar symptoms in some women after pregnancy (located in the neck).

These hormones aid in the regulation of the body’s energy usage. Low thyroid levels can lead to irritable or sad moods, sleep and concentration issues, and weight gain. When these physical changes are combined with the dramatic changes in the mother’s life—the natural feelings of being overwhelmed with new responsibilities, pressures to be a “great” mom, a sense of loss about the life that the lady had before—puts the female at risk of suffering from perinatal/postpartum depression, or, in rare cases, postpartum psychosis too. 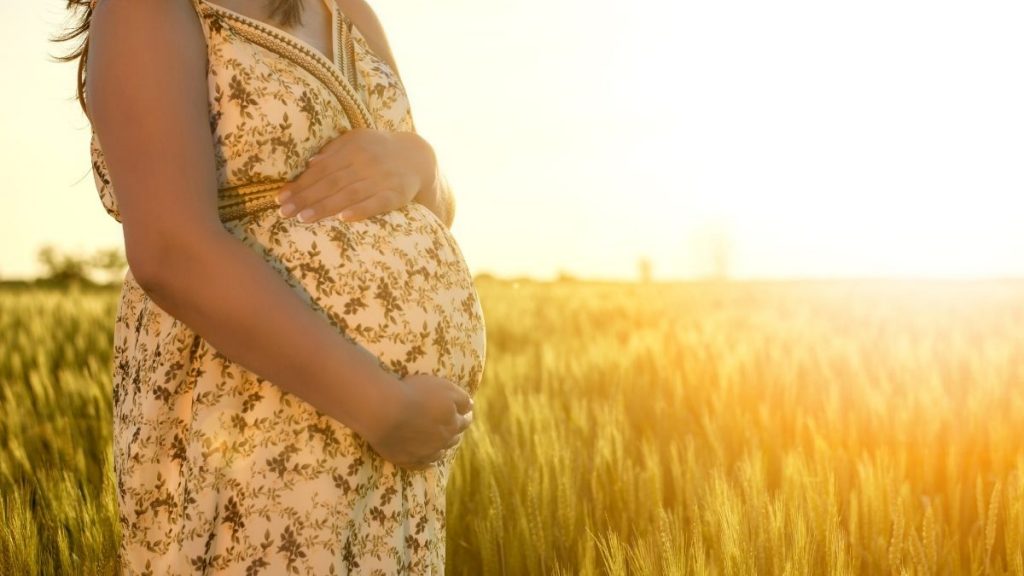 The different kinds of depression during and after pregnancy

Depression during and after pregnancy is usually classified into the following categories:

(2) perinatal depression (which includes both prenatal and postpartum sadness), and (3) postpartum psychosis.

In the days following childbirth, many mothers experience what are commonly called the baby blues. In addition, 50 percent to 80 per cent of all moms are said to experience “postpartum blues” after giving birth. The baby blues are typically only transitory for most women, lasting a few days to two weeks following delivery. If one is suffering from the baby blues, one could:

The symptoms are typically mild, and there are effective treatments available:

Pregnant and new moms who are overwhelmed, irritated, nervous, teary, or sad should not be ashamed or silent about it. Instead, they should speak with their doctors as soon as possible to obtain the help — and, in some circumstances, therapy — they require. Perinatal depression symptoms can range from moderate to severe. Some major symptoms include

Perinatal depression can be treated successfully. Talk therapy, or a combination of antidepressant medication, talk therapy, and supportive community services, is the most common form of treatment. Despite its efficacy, many women do not seek therapy. In addition, some people are afraid to use antidepressant drugs because they are concerned about the health risks to their baby.

Postpartum psychosis is a transitory condition that may be treated with expert assistance, but it is a medical emergency that demands prompt attention.

During pregnancy or after the birth of a child, any woman might feel sad and a major reason for this is the hormonal upheaval that the body is going through. In such a situation, you may feel tired or not feel like participating at all. However, this doesn’t mean that you are any less of a mother. In such a situation, seeking therapy or asking for help will not make you sound weak.

It will, however, make you sound aware and responsible. You have given birth, your body has gone through so many changes and hence, if you are accepting that you may need help- it just makes you even stronger than the strong and beautiful woman you anyway are!